Ode to the void – book launch in Sao Paulo, Rio and BH

“Romano Guerra Publishers and Nhamerica Platform launch the Latin America: Thoughts series on June 6, 2017 at Marieta Space (r. Maria Paula 96, São Paulo), with the presence of the authors and mediation of Fernando Lara, followed by an autograph section and chat.

“The first three books – Architecture and Nature, by Abilio Guerra, Ode to the void, by Carlos Teixeira (Vazio S/A) and Espaço de Risco, by Otavio Leonidio, will be released in print and e-book format in English and Portuguese.

“This month there are still the launches in Rio de Janeiro (PUC-Rio, June 14) and Belo Horizonte (Quixote Bookshop, June 20). 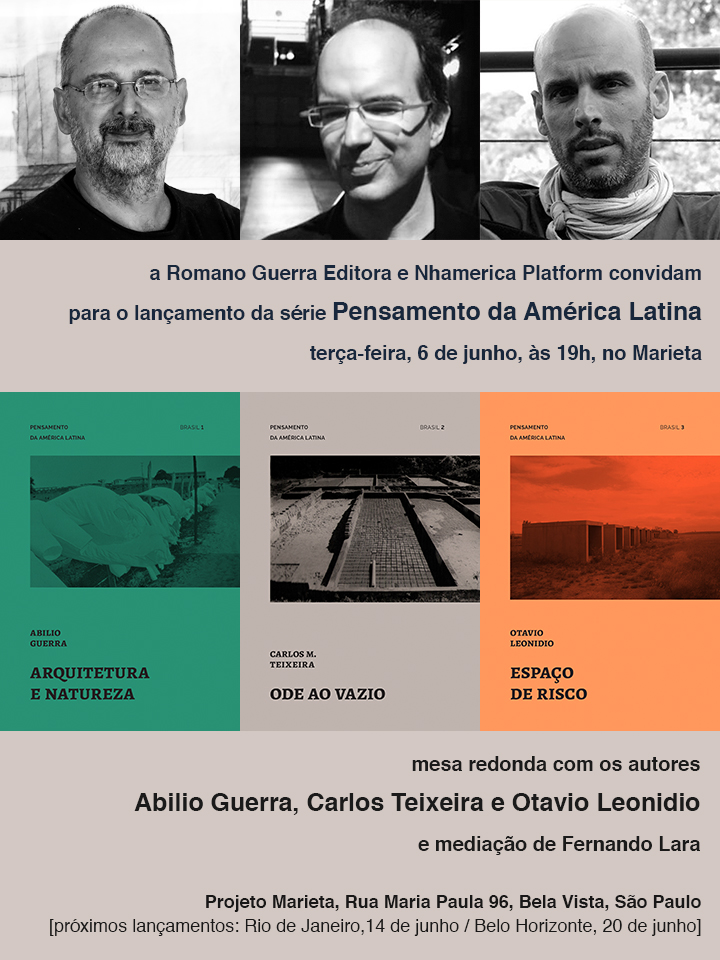 About the books
“First book in the series Latin America: Thoughts, Architecture and Nature, by Abilio Guerra, brings a collection of texts that point to a birthmark of modern culture in Brazil in an alternative project of modern action – where culture and nature occupy major roles -, and which, due to its discursive efficacy, metamorphoses into real features of modern Brazilian architecture.

“Ode to the Void, second book of the series, brings texts by Carlos Teixeira (Vazio S/A) written between 1999 and 2015 and previously published in Vitruvius online journal. This republication is not a simple collection, but an organization that defines a more coherent and articulated narrative to previously isolated texts, giving light  both to simple themes – social segregation, spatial fragmentation – and unusual subjects – the weeds, emptiness, the reverse, the stilts.

“Third volume of the series, Espaço de Risco combines texts written by Otavio Leonidio from 2005. So far scattered, the texts deal with three central themes: the thinking and action of the great ideologist of modern Brazilian architecture – Lúcio Costa; the contemporary production of architecture in Brazil, represented by the works of Angelo Bucci, Christian de Portzamparc, Álvaro Siza and Lelé; and finally the complex relationship between contemporary art and architecture.